The Story of Atomic Glow 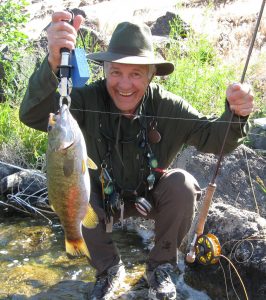 My name is Alan (Al) Wood, founder of Atomic Glow!

My story is probably no different from the other peoples’ wanting more or different than “what is out there”.  I had tied several dozen steelhead flies for the coming season and decided to test the ‘glow’ material that I had used in those flies.  Shocked; I discovered that it only ‘glowed’ and was gone in a matter of minutes.  I can’t describe my disappointment other than it bordered on utter disgust.  I felt the hours of careful tying details and planning were a waste.  My anticipation of fish actually being able to “see” my fly in any conditions went down the drain.  My disappointment turned to anger and then to action.  I decided to find ‘real glow’ for my fly fishing flies!

I wanted this ‘glow’ to really last a long time so fish could see it in the darkest conditions.  I soon learned the difference between UV treated material and UV “charged” material.  Flies with UV materials must have continuous ultralight rays on the treated material for effect.  In Atomic Glow it “stores” the ultraviolent rays which causes it to ‘glow’ continuously even after the light source is removed and is more visible in shade or darker conditions e.g. murky waters, dawn, dusk or night times.  Logically I reasoned that if the most glow material is used the longest it would radiate. 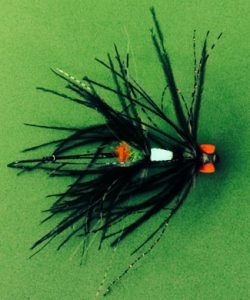 After working with a company, we finally found a material that would work in tying the many styles of fly patterns that are in the waters today.  Little did I realize that it would also last so long.  Fully “charged” Atomic Glow will last at least 8 HOURS!!!!   At first I thought it was mostly for my use and a few fishing buddies…..but how do you keep a good thing down.  Questions and demands soon forced me to learn about larger numbers, processes, and marketing.

So, I “joined the 21st century” as my son said.  With the help of my wife, Diane, several close friends, and many willing fishing partners, we have set out to bring Atomic Glow to the fly fishing world.  The response from Fly Fishing Expos’ and visits to Fly Shops has solidified my belief in the need of “real lasting glow in our flies.  The excitement and demand has already brought many ideas for colors, uses, and questions that Atomic Glow can expand in the future.  Currently we have Atomic Glow in three colors: coral, green and blue.